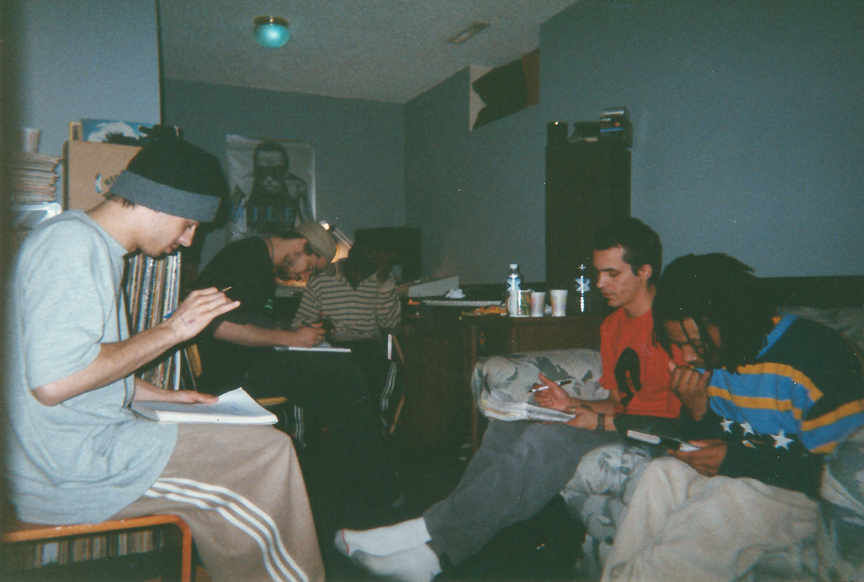 Continuing his “A Thousand Words about a Picture” series, Blueprint explains the backstory to this picture of The Orphanage that was first seen in in his “Siilver Lining” music video.

***A THOUSAND WORDS ABOUT A PICTURE***

I’m not sure who took this picture, but I think it may have been taken by either Eyedea’s mother Kathy or Sage Francis. This picture was taken in the winter of 2000 in St Paul, Minnesota. From left to right you see Eyedea (R.I.P), Aesop Rock, Myself, Slug, and ILLOGIC. A beat was playing in the background and we were writing a song together for The Orphanage project during the week we all came to town.

The room we are in was Eyedea’s first studio. This space, the original studio he built, was more bare bones than the refined space he would build several years later. Although it was small, it still had a vocal booth and Eyedea was a dope engineer even back then. His second space was much larger, took up two rooms (one for tracking drums), and reflected the inclusion of live instruments. The space in this picture was more of a studio where using vinyl to make sampled beats was the process. If you look behind Eyedea, you can see a rack of his records. If you look over my shoulder, you can see the MPC-2000 sampling drum-machine that I brought with me from Ohio to Minnesota. Eyedea’s sampler is next to it on the table. And if you look over Aesop Rock’s head you will see a poster of Miles Davis that was a constant across Eyedea’s first and second studio spaces. Miles Davis was always one of Eyedea’s favorite artists.

This picture was taken in 2000–long before people were writing and saving rhymes on their cell phones–so everybody in this picture is writing with an actual pen and paper. In those days, collaborating on music was completely different; artists had to be in the same room to collaborate on a song. If you were writing a group song with five guys rapping, that usually meant that you wrote the song one piece at at time. You typically didn’t show up with pre-written rhymes for records like that because you wanted the energy of the song to reflect everybody. That ensured that the song had continuity. And when everybody was on the same page, there was no feeling quite like it. That feeling of unison and energy was truly special. Nowadays, collaborating usually means using dropbox and e-mail; and sometimes the times the artists never even speak to each other. On one hand, it’s great that technology has allowed us to create music with people who live hundreds or thousands of miles away, but sometimes I miss those days of hanging out with the people you collaborate with. Especially because it’s becoming more and more rare every year.

It’s hard to believe this picture is 16 years old, Mikey is no longer with us, and we are all still doing music. Back then, I don’t think any of us envisioned we would have the kind of longevity that we’ve experienced. If you’re reading this and have supported any of us for the past 16 years, thank you. It means more than you know.

Have a great day,

For those that missed the announcement, Weightless Recordings will be releasing Blueprint’s new project, the Vigilante Genesis EP (produced by Aesop Rock) on May 27th, 2016.  You can preordering your signed copy here http://bit.ly/VGpreorder 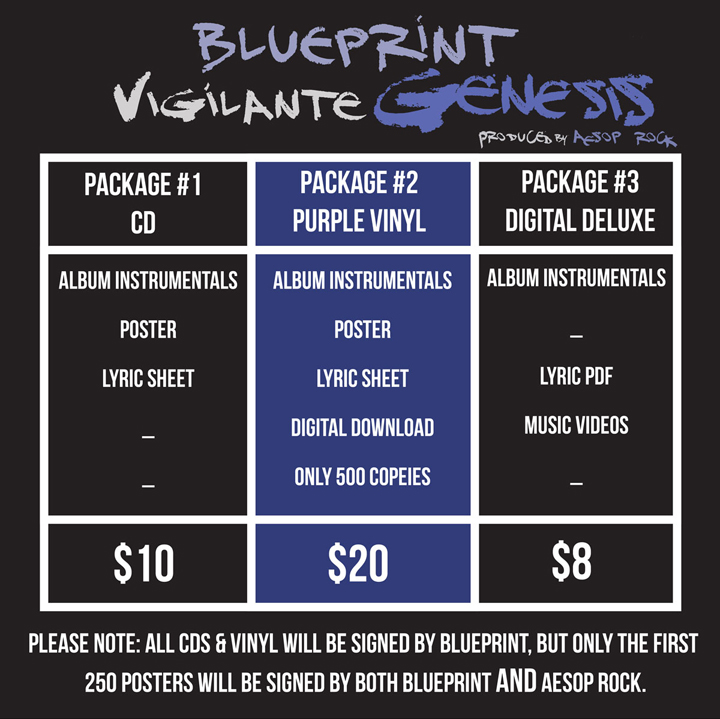