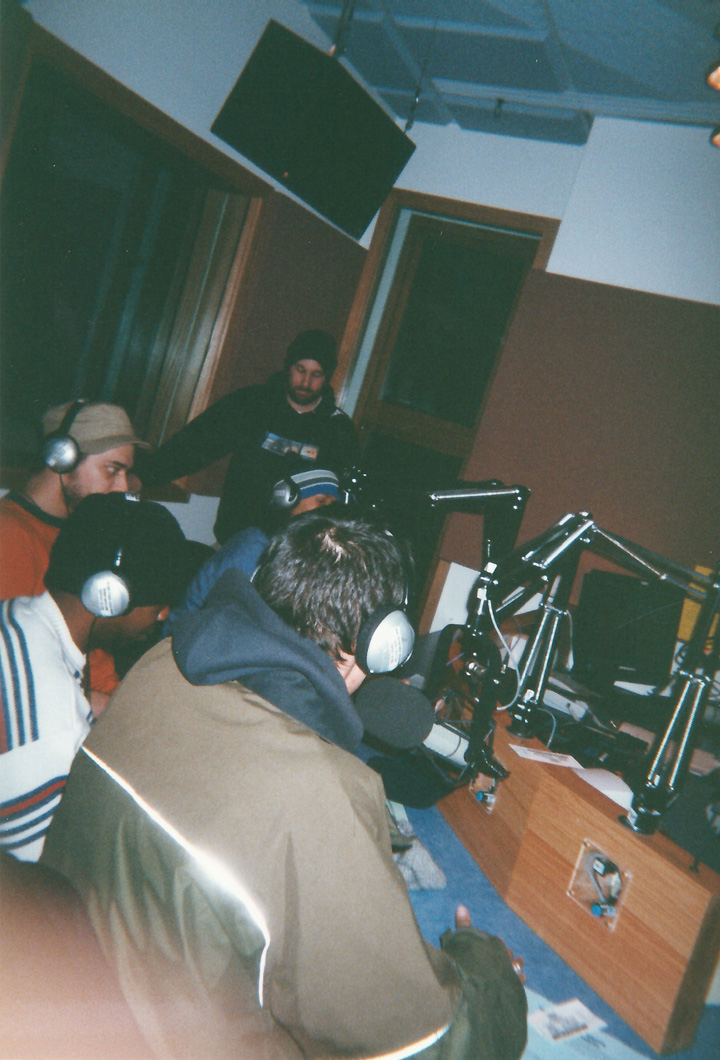 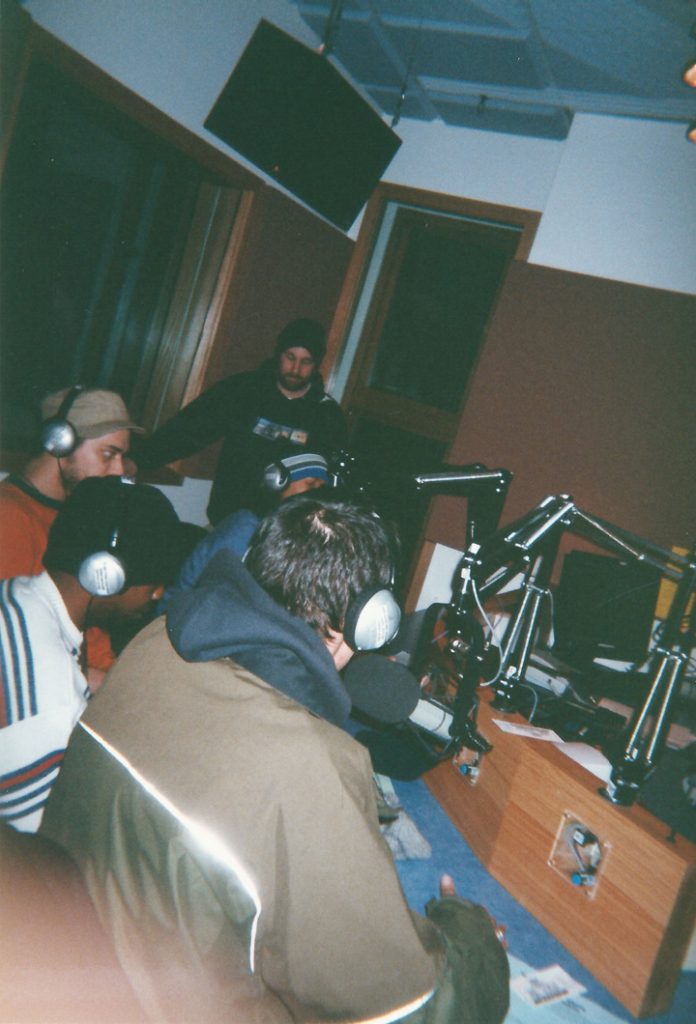 Continuing his “1,000 Words About A Picture” series of posts, Blueprint explains the backstory to this never seen before picture from the year 2000:

“I’m not sure who took this picture, but I’m guessing it was taken by either Kevin Beacham or ILLOGIC. From top to bottom, you will see Sage Francis, Felipe (of Los Nativos), Aesop Rock, me (Blueprint), and Slug of Atmosphere. There were a couple more seats to the right, outside the frame in this photograph, where Illogic and Eyedea were seated. This picture was taken in the winter of 2000 at the KFAI 90.3 FM radio station in Minneapolis, MN during the week we were in town to record the Orphanage project.

During the mid-90’s until the early 2000’s, what we now consider “underground hip-hop” was born. A lot of things had to be in place for this to happen; one being college and community radio. One of the most popular and influential radio shows of that era was based in New York and called the “Stretch & Bobbito” show. This show, which eventually became one of the most well-known radio shows in the world, specialized in playing the best underground records and breaking artists. Nas, Wu-Tang, MF Doom, Biggie, Eminem, Jay Z and many others were all given their big break on the Stretch and Bobbito show as unsigned artists. No matter where you lived, if you were an underground or unsigned artist, you had at least heard of it or it’s reputation, and probably dreamt about being on their show to share your music and show your skills. People would stay up all night to listen to this weekly radio show–that usually didn’t even start until 2 o’clock in the morning–just to hear what was going to be the next big thing.

Although Stretch and Bobbito were clearly the leaders of this type of radio show, there were many other shows popping up in the midwest that had the same locally and regional impact. WAIF’s “B-Boy’s Underground” in Cincinnati, OH hosted by G-Fresh and Mr. Dibbs; WNUR’s “Time Travel Radio” in Chicago, hosted by Kevin Beacham and J-Bird; and in Minneapolis you had KFAI’s “Til the Break of Dawn” hosted by Siddiq. If you were an MC at that time, you knew that if you went onto one of those shows, there was no slacking. You either had to bring next level music or some next level freestyles, because what you were doing was being measured up against all the other great hip-hop shows on underground radio at that time. And killing it on one of those shows would start a major buzz for you.

This picture shows us arriving at KFAI and recording what is now known as “The Orphanage Freestyle.” This 45-minute freestyle session–featuring Slug, Me, Aesop Rock, Felipe, Sage, Illogic, and Eyedea–took off immediately in popularity. People traded it on cassette tapes and CDs for years. Once youtube came around it was uploaded there and has hundreds of thousands of listens, which is pretty amazing for all freestyles. At the beginning of the recording you can hear Siddiq say, “Well I was trying talk to cats, but you know what…let’s just go ahead and start it.” We didn’t’ even wanna be interviewed, we were ready to kill it! Nowadays artists don’t take their radio appearances as seriously because they have so many other outlets, but we didn’t have that luxury back then (especially growing up in the midwest). We took those opportunities very seriously. I think that focus was reflected in our performance in this session and in all the art that we went on to make afterwards.”

Blueprint’s new project Vigilante Genesis EP is produced by Aesop Rock and will be out May 27th on Weightless Recordings.  Please preorder your copy on Signed CD, Signed Vinyl, or Deluxe Digital here http://bit.ly/VGpreorder 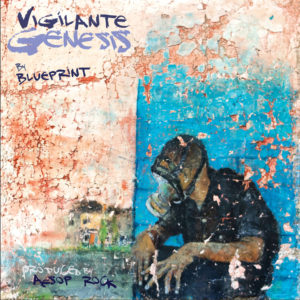